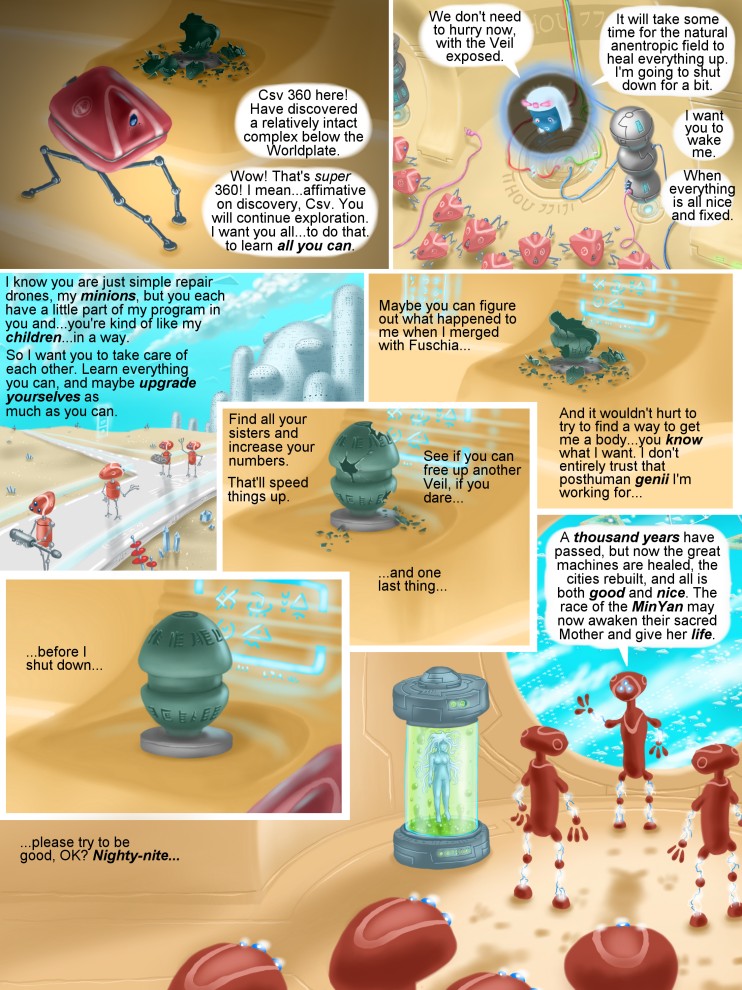 PAGE FOOTNOTES:   It's surprisingly tough to choose a good name for a page, sometimes. I went through 'Mother's Day', briefly considered 'All My Children', passed on 'Darwin In Steel', although I thought it was pretty good... and even considered pretentious titles like 'Mechanus Darwinia'. Ecch. Finally it hit me that the speech of the head of the High Counsil of the MinYan sounded rather Lovecraftian. The stars were in their place and it was now time to resurrect the Elder God(dess). That's when I settled on The Call of Cthursor. You can't go too far wrong with a Lovecraft reference. I heart Lovecraft.

As a side note, I should probably once again briefly go over electanic radiation for those that have not yet read Unicorn Jelly. The Tryslmaistan cosmos has dark, cold Veils in place of the life-giving suns of our universe of Mundis. The Veils, gargantuan triangular fractures in spacetime, emit electanic radiation in three flavors, equivalent after a fashion, to the positive and negative charges of particles in Mundis. This radiation is the fundamental basis of all energy exchange in Tryslmaistan, including that of life.

Electanic radiation has the intriguing property of being effectively anentropic, which is to say that it weakly reverses the flow of events and the loss of information. Information in the cosmos, such as the structure of a jar, a cell or a stochastic computational engine, will gradually be regained, provided it has not passed the Sand Limit. The Sand Limit is a way to define that point beyond which so much information has been lost -so much entropic decay has occurred- that even electanic force is incapable of reversing the loss, at least completely. A structure so degraded, ultimately crumbles to the ubiquitous sand that covers the Worldplates of Tryslmaistan, thus the origin of the term.

The action of electanic force, and the anentropic effect is illustrated in this page by the gradual reforming of a fairly famous artifact from Unicorn Jelly, which was shattered either at some point in the distant past before the HumanoJellese experienced their version of Singularity and Ascention, or perhaps as a result of Cursor's rather hamfisted effort to shut down the ancient machinery created to completely harness the entire output of a Veil, leaving her abandoned museum in a Veil Shadow.