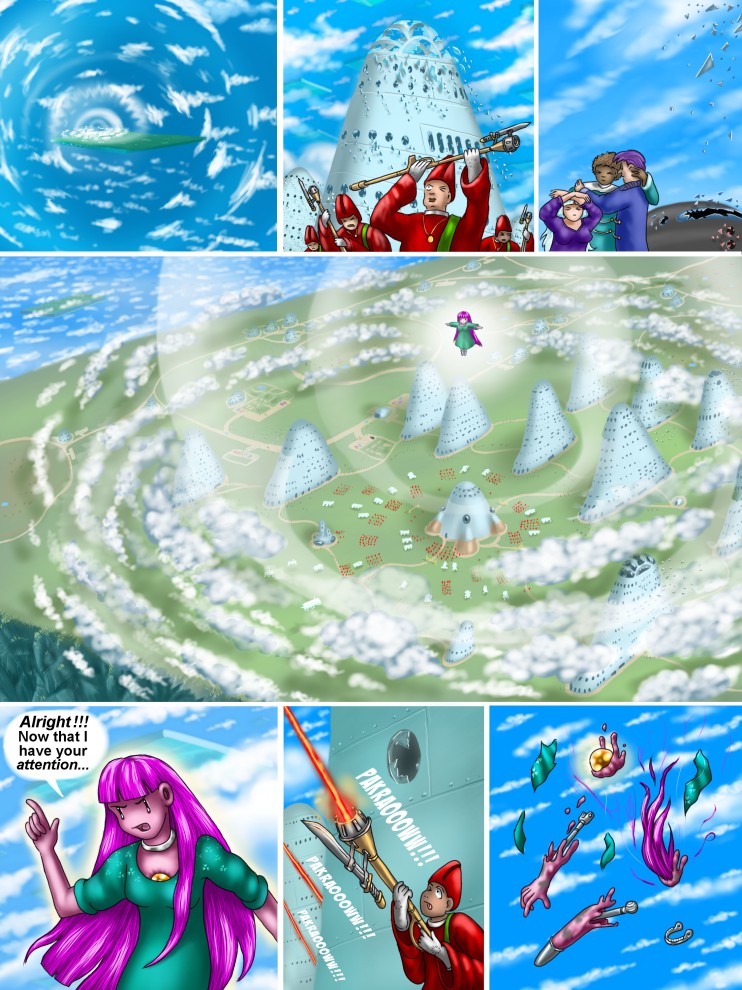 PAGE FOOTNOTES:   The known exceptional powers of Heliotrope and the Omnipitor are:

Omnipitor Activation Increase, which acts as a powering up of her capabilities, but which also generates a massive shockwave, which she has clearly learned some degree of control over the scale of. The maximum shockwave she could create is presumed to be truly horrifying, it is clearly difficult for her to make the effect as minimal as possible.

Luminous Purity Column, which effectively flattens out the complex waveform of the timespace Worldline of a small, localized zone; essentially erasing the history of anything within that zone to a kind of fugue state - an uneventful, empty time devoid of complex events or information. Put simpler: history flattening. It is doubtful that she understands this power, or how to control it with any finesse.

Flight, the capacity to levitate herself and fly freely.

Perception, Heliotrope can apparently recieve information from a diminishing, but reasonably large zone around her, as though her senses were diffused within a sphere surrounding the Omnipitor. It is likely that she does not literally see through the plastic eyes of the doll she is motivating, but rather from a point near where they are extrapolated to exist. She has been shown to be able to roughly sense events through walls and can likely sense radio and other broadcasts at some level.

Volume, It is reasonable to assume that Heliotrope must be able to generate sound at almost any level of volume; for her to be heard speaking clearly while hovering far above in the ever-windy sky, she must be generating megaphonic levels of sound.

Animation, The Omnipitor, which runs Heliotrope as a function, can puppet any cohesive articulated shape into which it is plugged, moving it as though it were a living thing. It would also seem to be able to animate non-articulated matter as well, provided it is flexible, as can be seen in the movement of Heliotrope's mouth, and the rubbery material around her plastic eyes.

Time Out, A very localized state of temporal grace in which Heliotrope and at least one other person can walk outside of the normal flow of time, at least to some degree. The effect likely operates in a spherical zone around the Omnipitor.

Kinetic Freeze, it would seem that the Omnipitor is capable of temporarily halting time within a small region, or perhaps with regard to a single object, such as a vehicle. This may simply be a specialized application of the Time Out power.

Temporal Echo, Not so much a power as a contamination and a reaction; when the Hyperversal Introitus was used by the Chatoyant Sciences Academy to breach time as well as the boundary of the universe, a curious 'Groundhog Day' like time skip happened to those people who had directly handled the Omnipitor. It can be assumed that physical contact with the Omnipitor somehow contaminates other things with some sort of capacitated energy that is affected by temporal perturbations of universe. It is reasonable to assume the Omnipitor also reacts in some way itself. While merely an effect, it is suggestive of whatever technology makes the Luminous Purity Column possible.

While these powers and effects are interesting, they make for a very impotent superhero, although, arguably, they would be wonderful for a supervillain. The shockwave effect of the Omnipitor powering up alone could, in theory, shatter entire Rectilands, obliterating everything upon them. The Luminious Purity Column is just plain horrifying.

Alas, poor Heliotrope Security Aoi has to stop an entire army, a particularly fanatical, large, and violent army, using only these powers, without harming the vast number of civilians nearby, including the people she loves.

Her first attempt was to get their attention in order to talk them out of their attack. Oops. But after Chartreuse, Heliotrope doesn't want to hurt anyone again.

She has two spare doll bodies, recently bought on the drive over. Clearly she is going to need to use up one of them right now.

How would you stop the Church Army? Is it even possible? What a problem!