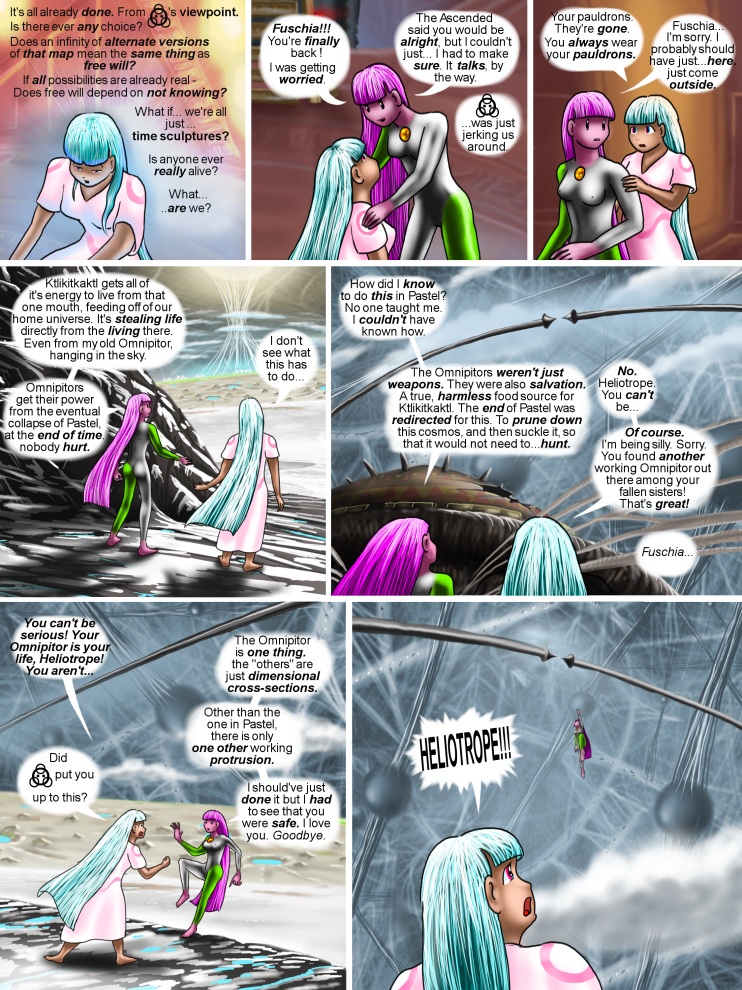 PAGE FOOTNOTES:  The question of how Heliotrope could possibly know such godlike things - her Omnipitor Activation Increase, Luminous Purity Column, and of course the almost unimaginable Hyperdimensional Ring itself - becomes obvious. She could only know such things if they had been programmed into her, as basic functions she was originally built to do. These are the workings of vast and terrible beings, forces that transcend both time and space, the powers of gods.

It would be impossible for Heliotrope not to realize this, to comprehend that such power is not merely invented at will, but must have an origin and a maker, and have been installed in her for some purpose. She is a manufactured being, and she was built for some reason. Now, in this hungry universe, with the problems it causes made clear, we, and she, can now understand why the Omnipitor was created at all.

The Fall Of Myrmil, which we now know was actually called Myrmidon, as told in Unicorn Jelly, occurred as the result of the detonation of a Trato-Yauronic device, built to crack open the walls of the cosmos itself. It did this, even as it brought ruin to the cosmos of Tryslmaistan, and burst out into the Fertile Void between the universes, exploding into a stable Arc-Duct, normally a terrible rushing river of matter, space and time. But this stable Arc-Duct solidified into a universe unto itself, into which helpless castaways from Tryslmaistan fell, carried along upon the flying Nakimono Research Island.

Called Pastel, this new Arc-Duct universe still rushed onward, a quiet river, but still a dangerous one, the end of which was a crushing turbulent Fall. The Post-Singularity entity we may call OoO, presumably tasked with dealing with the vampiric anomaly of Ktlikitkaktl, bent the force of the far-future end of Pastel back upon itself, to power a device which could solve the problem of the hungry living universe: the Omnipitor.

A multidimensional machine, the Omnipitor's many 'slices' or 'cross-sections' as seen from the perspective of human spacetime became as an army, housed in sculptures designed to invade and attack the drone armies of Ktlikitkaktl. The battle was fierce, and nearly a loss, and most of the Omnipitor was destroyed in the process, but so were every alternate universe splay of Ktlikitkaktl as well.

In the end, only two shards of the Omnipitor remained, one damaged and half-buried in snow on Ktlikitkaktl, where it fell, and the other the one sensible backup spare, kept in a pocket of Whitespace, out inbetween the universes, safe from all.

Dr. Ransei Aoi  and Meiun Nakimono of Pastel found the battlefield on the last splay of Ktlikitkaktl, and Ransei pocketed the shiny Omnipitor. Heliotrope arose from his drunken whimsey, and because of the damage to the Omnipitor, rapidly grew beyond her original purpose.

Now, finally in possession of all of her faculties, transferred to the last, untouched, perfect portion of the true Omnipitor, her full purpose and reason for existence is revealed. A weapon that subdues an enemy, then cares for it afterwards, removing the reason for it being an enemy in the first place. An elegant solution for an intractable foe.

Along the way, the Jellese of Pastel were saved from an existence of pain, war, and madness, a lost artificial intelligence callously left behind by the HumanoJellese when they went past Singularity into an Ascended State was given both a soul, and a heart. A cleaning up of pety issues by the Ascended OoO, giving it's golden cosmic bowling ball a bit of spin on the way to the pins.

Fuschia has reason to wonder - was all of this planned in advance by the godlike intelligence of the post-singularity entity? And if it all was, if every aspect of her life was just a few trills in an orchestral piece she is too deaf to hear, what does it even mean to be a mere human, to live, and to love?

And for Heliotrope, the problem remains; Ktlikitkaktl remains a threat to not merely the universe of Pastel, but all universes everywhere, for its feeding spacetime tendrils do not care what they feast upon, only that they hunger. There is only one free Omnipitor left, one working shard of the vast machine, and to take the one installed in Pastel would be to condemn an entire people to endless horror and misery.

She is only a doll, a thing - didn't her father tell her that constantly? Has she not done terrible, awful things to actually living human beings like poor Chartreuse, that must be atoned for? Is not the future of all universes, and all the peoples within them, and of her own beloved Fuschia more important than her one, accidental, partial life?

Her purpose is known. She was constructed to fulfill it. A machine must do what it was built to do.