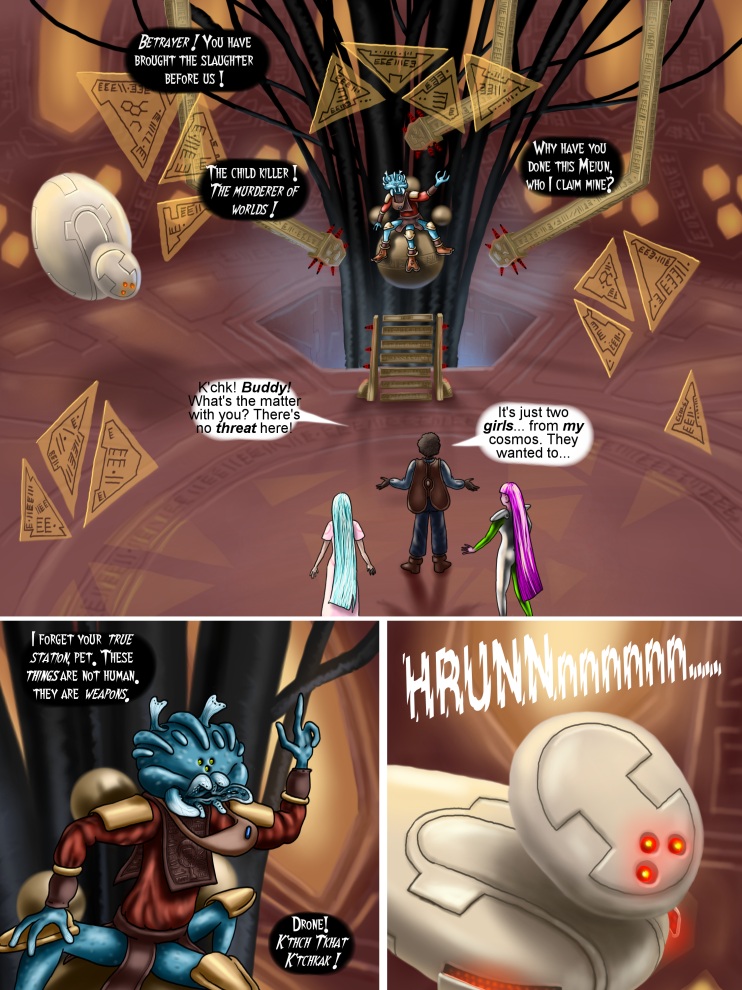 PAGE FOOTNOTES:  K'chk, the first living Ktlikikak we have seen - though we have seen statues of this species before in both Pastel and Unicorn Jelly, is not, you will notice, an insect. At least not in any sense we know on earth. Though roughly insectoid at first glance, the Ktlikitkak clearly have some kind of internal skeleton, and you are not wrong in feeling that their heads are soft flesh over a skull, rather than chitinous and plated.

There are many reasons for this, not the least of which is the inverse square law with regard to chitin, though of course we would expect a true insectoid sapient to have a shell of something vastly stronger than earthly insects possess. K'chk's mouth parts are soft and more like the flesh of a squid than anything else.

K'chk's blood is white, and this colors the extremities of the species. Pigmentation is obviously azure, and the same for all members of the Ktlikitkak. The Ktlikitkak do not have individual identities as we know them, neither are they a hive creature - they are manefestations of the living cosmos of Ktlikitkaktl itself, and act as an organ within that great body.

Although K'chk sounds very haughty and high-and-mighty, all egoic and proud, this is just a best-effort expression produced to convey information which it calculates will have meaning to its single pet, Meiun Nakimono. The Ktlikitkak ruled over trillions of slaves from millions of species at one time, and they were harsh, cruel, and haughty masters - to those species who responded best to that form of treatment. To other species, motivated differently, the Ktlikitkak acted vastly differently. Primates can be motivated easily by displays of authority, power, and dominance.

This is also the first time we have seen a Ktlikitkak Drone in working form... though we have seen an army of them half buried in the snow, once before, squared off against Heliotrope's sisters. I smell a fight coming. Especially since the Ktlikitkak Drones are their answer to the Unity's omnipitor-motivated attack sculptures.

Heliotrope has never faced an opponent equal to herself.