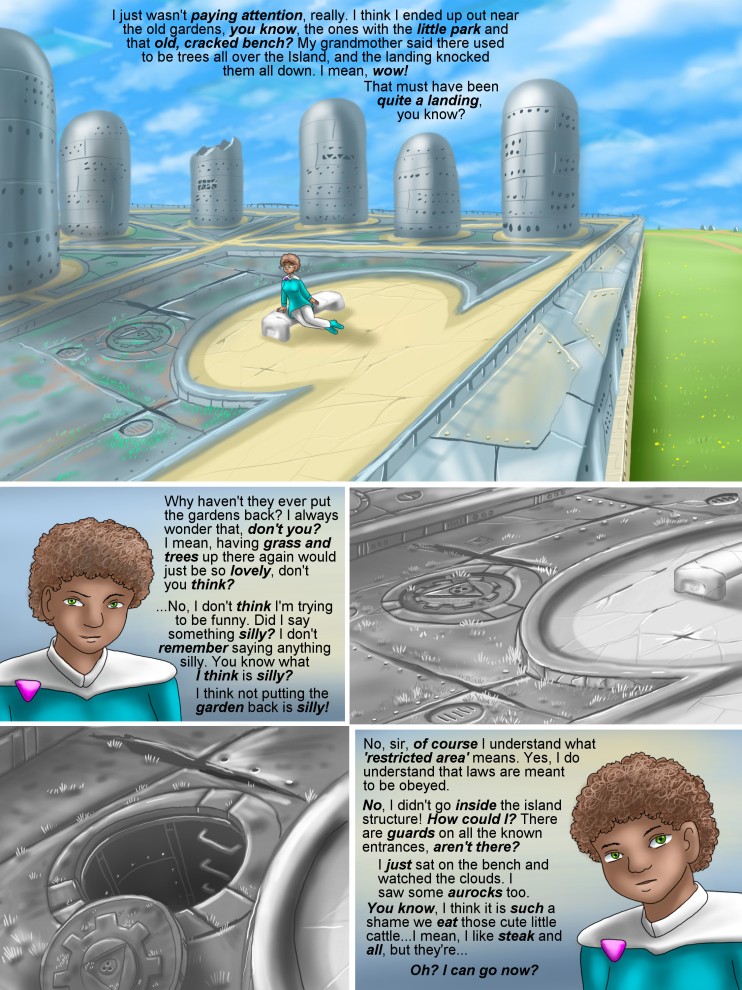 PAGE FOOTNOTES:  What would it be like to visit the Nakimono Island Historical Site, the location where the original floating artificial island from Tryslmaistan crashed? What would one see there and what could one find? Well, for one thing, you could take one of the tours.

The tour includes a cart ride around the grounds that surround the remains of the Nakimono site, which have been filled in since the crash and turned into nice gardens, a ride which allows tourists to appriciate the size and magnitude of the artificial Island from afar.

After that, one can take one of three guided tours through the structure - one focuses on the upper deck of the island, where once lush gardens were located, along with a zoo, apartments, and various towering research laboratories. A different tour takes tourists into the bowels of the island, to see the belowdecks living quarters, the electanic power rooms, the recreational facilities and the large kitchens. The third tour is entitled 'Forbidden Nakimono' and is supposed to take you through the deepest and most secret areas of the artificial island, right down to the impact levels, where entire floors were smashed together as the island slammed down onto Cymru continent. In reality, everything you see on this tour is all tame stuff, although the crushed floors at the bottom are kind of chilling, especially when it is stated that because of the mass of the island, it is impossible to remove and properly bury all the bodies that must have been in those smashed areas.

After that, there is a history museum to visit, with various artifacts and information to see, and a very nice restaurant that serves a delicious kind of cross between a cake and pie fused together that is made to look like the Nakimono Island itself. They also have a very delicious version of isicia omentata, or the ancient Roman equivalent of the hamburger (cattle, of a sort, survived the crash, and can be seen in many pages of PDH, as did many other plants and animals from ancient Myrmidon...the foodstuffs of Myrmidon, and Pastel, are much more diverse than what is available in the Stormfall splays of Unicorn Jelly, secondly, modern Pastellian society went through a revolution a few hundred years ago, where the entire culture was reconstructed to resemble what they imagine ancient Earthenland to have been, which is to say, the Roman Empire as seen through a twisted lens). The history museum also serves some mighty fine steaks, too. Part of this is because the lands around the crash site are now all cattle country (you can see the fences if you look).

The parts that are not accessible to the common public -or even to the Nakimono family, except for lost Meiun, who had government clearance- are the actual research labs that survived intact, the one surviving Unicron Drone launch bay, the vast library and records chambers, the control rooms, and especially Dr. Godan's laboratory complex (which includes the factory section used to construct the original Trato-Yauronic device).

The island as a whole has enjoyed a degree of reconstruction. Obviously the undercarriage structures were crushed beyond any hope of restoration, but the upper levels and the upper deck have been greatly restored. There has never been enough funding to restore the gardens or the zoo, however, though there was a movement once to try to raise money to do just that, it never succeeded. So the gardens are all just empty hollows in the deck, where once grass and trees were cultivated before the island entered the cosmos of pastel. All the soil was removed for early farming efforts on the ground around the island.

The island split open into sections on impact, those sections have been raised and welded back together to make one structure again. Some of the deck towers were restored, but others remain cracked or partly broken off. All are abandoned, and some native life, as well as earthly moss, has tried to colonize much of the upper deck. Occasionally an effort is made to clean it up, but it seldom gets very far.

Oh, and yes, that is the very same bench that in another universe altogether, a non-Stormfall universe, Kaye Haychold and Lymcit Pho stop to sit and talk upon.