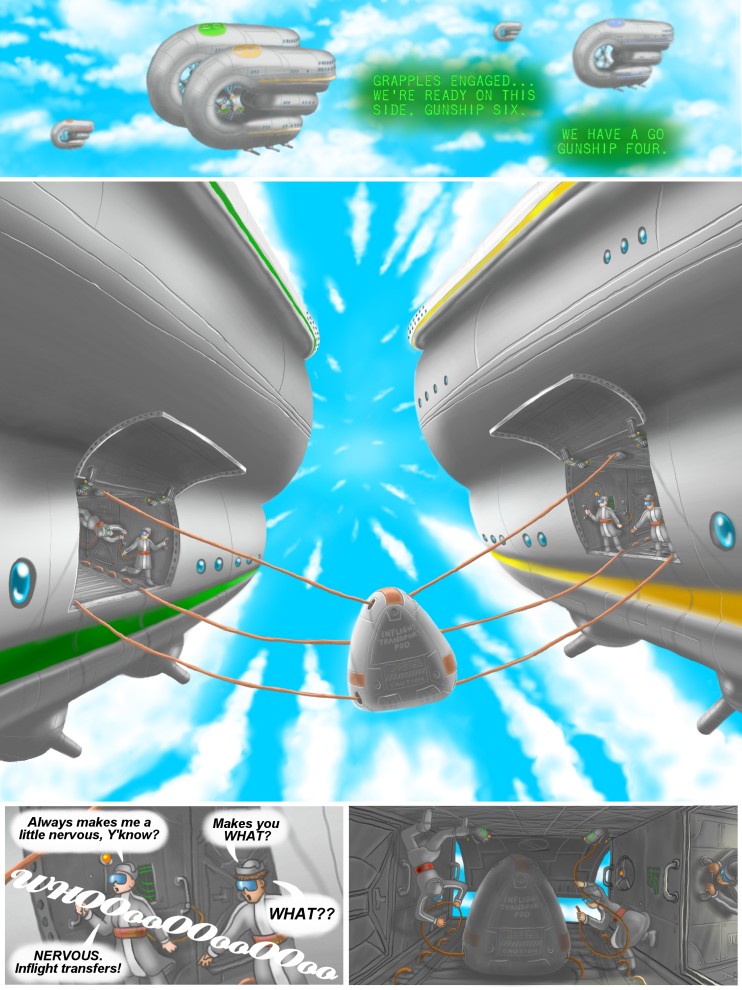 PAGE FOOTNOTES:  The Triumviral government of Pastel operates and maintains a fleet of eight Gunships. Because of various reasons, the
Gunships are not numbered in the standard color order of Pastel, thus Grou Shiro's Gunship is Yellow Six.

Despite such a large empire, the limited number of Gunships has to do with the scarcity of metals in Pastel. Previously, we have seen
entire rectilands stripped of their resources (such as Cerul Morado's useless 'Birthday Present' continent) as well as the economically
depressed  continent of Senryokyu where Fuschia and Chartreuse live. In the latter, it is obvious just how the mining process works,
which is essentially strip mining, leaving a thin wall to shield the wind around the foreward edges of a continent, the middle hollowed out
entirely, at least on the Twiland side. Dayplains are generally not stripped as deeply, as their greater exposure to the light of the
cosmic Linea is desirable for agriculture.

The gigantic Gunships are needed for one primary purpose: putting down rebellion and invasion. Used both to police the center of the Pastellian
empire and the colonies of the frontier, the greatest danger is ususally not from human rebellion, but rather to suppress, eliminate, or
repell the outcast Jellese, the runaway slaves of the Pastellians, the 'Drapeta Umor', or 'runaway-slaves devoid of shape' in reconstructed
Latin.

The Drapeta Umor must fight for survival in this universe where the local laws of physics do not favor them, and
some have become very angered at their plight. Thus they not only take land for themselves, but some also
raid the colonies of Man, where they infringe on Jellese-claimed regions.