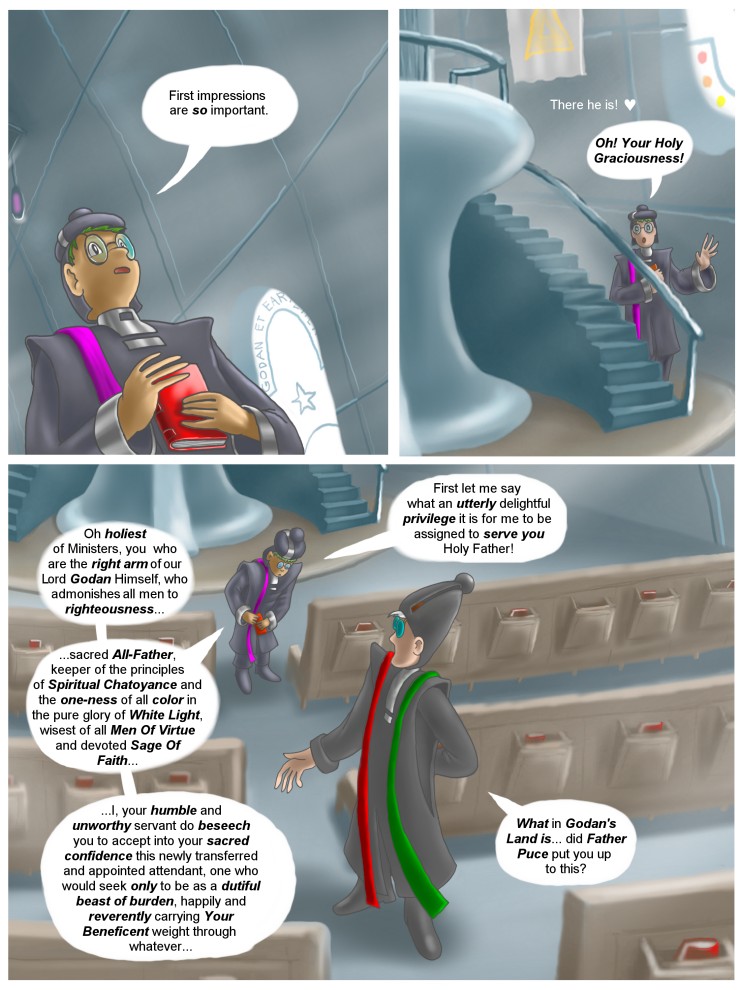 PAGE FOOTNOTES: The Holy Reconstructed Church Of Godan derives from the stories and artifacts that survived the initial
entrance into the cosmos of Pastel. The greatest influences upon the structure of Godanism come, like so much of
Pastellian culture, from an attempted reconstruction of the original homeworld of Man, Earthenland. The Pastellians
only had so much to work with, however, and everything is of course affected by the facts of life in the Pastel cosmos.

Godanism centers around a deity called 'Godan', who is attributed with creating the universes of the multiverse specifically
for Humankind to make use of. Central to this faith is that a True Universe is defined as being one created to support
and sustain human beings within it, and that humanity is the chosen species of Godan. All other creatures, including
the sapient Jellese, are given to Man to make whatever use of Man so desires.

Spiritual Chatoyance is a Godanist tenet that offers that all feelings and thoughts and knowledge are like the
colors of light, and that just as all the colors of light can be blended to create white light, so all things in all
of creation ultimately represent aspects of the White Light of Godan. The spiritual goal of Godanism is to
seek unity with Godan through prayer and reverence until the True White Light of Godan pervades all.

Godanism has many fairly elaborate and fairly boring rituals, much like any organized religion, an assortment of
expected holy days and events to mark the passages of life. In flavor, Godanism is probably most like a mixture of
elements from all of the various sects and sub-sects of current day Christianity, held together by a typical
clerical hierarchy, the top of which is held fiercely by The Most Holy Hei Kelainos, Triumvirate Minister Of Religion and Morality.

Because Pastellian civilization is theocratic, the church holds incredible power over every aspect of government, and
no other belief system is tolerated at all. Pastel has one government, one god, one faith, one way to live. And of
the three parts of the government, Science, Security, and Religion, religion ultimately always wins.

Hei Kelainos is the CEO, the Pope, and the President all rolled into one. He may not be the wealthiest
man in the cosmos, in terms of personally owned materialism, but he is certainly the most powerful man in Pastel,
and with every church essentially a palace, the power of religion to make kings in effect, if not in name,
can easily be understood.