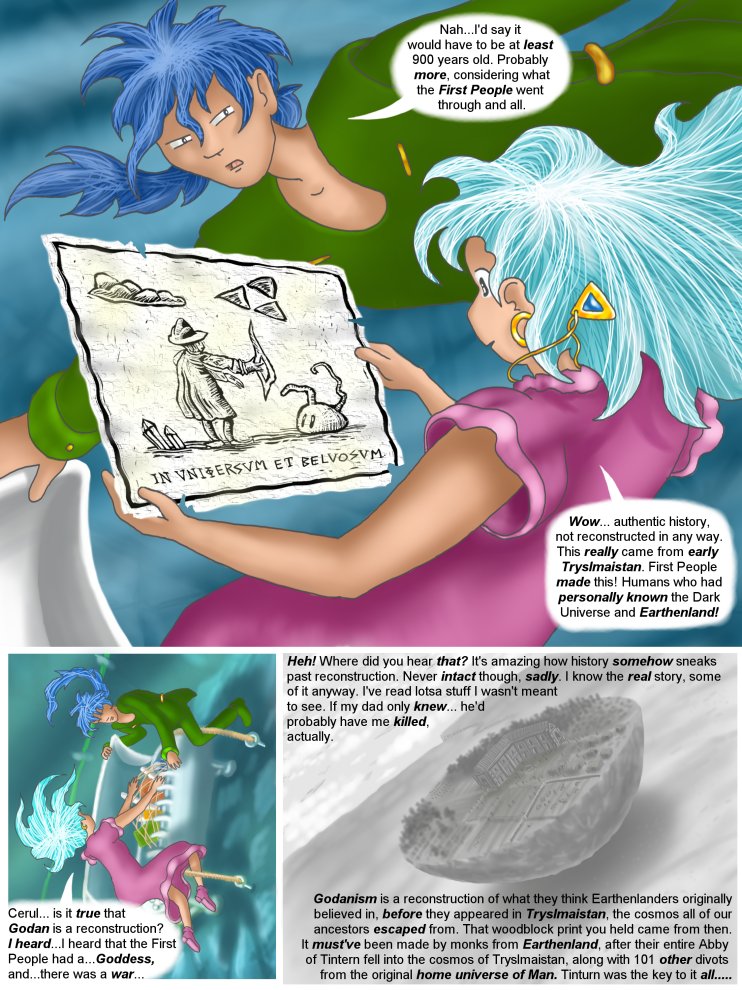 PAGE FOOTNOTES: For those readers unfamiliar with my other, directly related work, Unicorn Jelly, I should provide a brief overview of the chain of events referenced here. Unicorn Jelly tells a multi-generational saga of humans, lost in the alien universe of Tryslmaistan. The story of Unicorn Jelly occurs at least 300,000 years after humans first arrive in that strange cosmos, and thus far, far in the future of the story of Pastel Defender Heliotrope. In the time period of our current story, we are only perhaps 1000 to 1500 years at most away from the initial event that transplanted humans from our earth to the universe of Tryslmaistan, perhaps even as little as 900 years from that moment. Thus, the Pastellians have a much clearer idea of what happened when the First People, the original people from earth and the Mundis universe, our universe, what the Pastellians call 'Earthenland', arrived in Tryslmaistan.

What is known is that suddenly, instantly, 101 spherical chunks of earth appeared, sitting on a Worldplate, a vast triangular mass, in the cosmos of Tryslmaistan. These chunks, or divots as they are called, were half air, and half land, and each came from a different time period in earth's history. Some were from our future, some from our past, some from our near present, and some from very distant times indeed. The cause of this transplantation has been determined to have been a natural phenomena, a form of 'weather' in hyperspace, where a 'rain' of hyperdimensional 'holes' pass through a cosmos, interact with that cosmos as they are drawn to a focus of mass (such as a planet) displacing spacetime, and then sweep on through the timeless multiverse, to deposit their 'raindrops' upon a mass in another universe altogether. Because the phenomena occurs outside of spacetime as we know it,  the 'hyperstorm' initially occurs simultaneously across a wide swath of time within a given universe, and deposits at one moment in time, in another.

In the course of Pastel Defender Heliotrope, we will learn much more about this HyperRain, and many other things besides, which have long been a matter of curiosity to the loyal fans of Unicorn Jelly.

The Pastellians are originally from Tryslmaistan; however they escaped from that cosmos because it faced complete destruction. They have a shared history with Tryslmaistan, and ultimately, all the way back to us, here on earth.

The  progression of humans, therefore, is first Mundis, the universe we live in, then Tryslmaistan, then Pastel.

While it will not be necessary for any reader of Pastel Defender Heliotrope to need to read Unicorn Jelly to understand any part of the story here, the two sagas are deeply related to each other, and certainly there will be special rewards in the end for those who have read both. For others, simply go with the flow, let the complexities wash over you, and enjoy Pastel Defender Heliotrope on its own merits, as a multiversal story that must needs reference a mysterious and complex backstory, as many fantastic stories do.