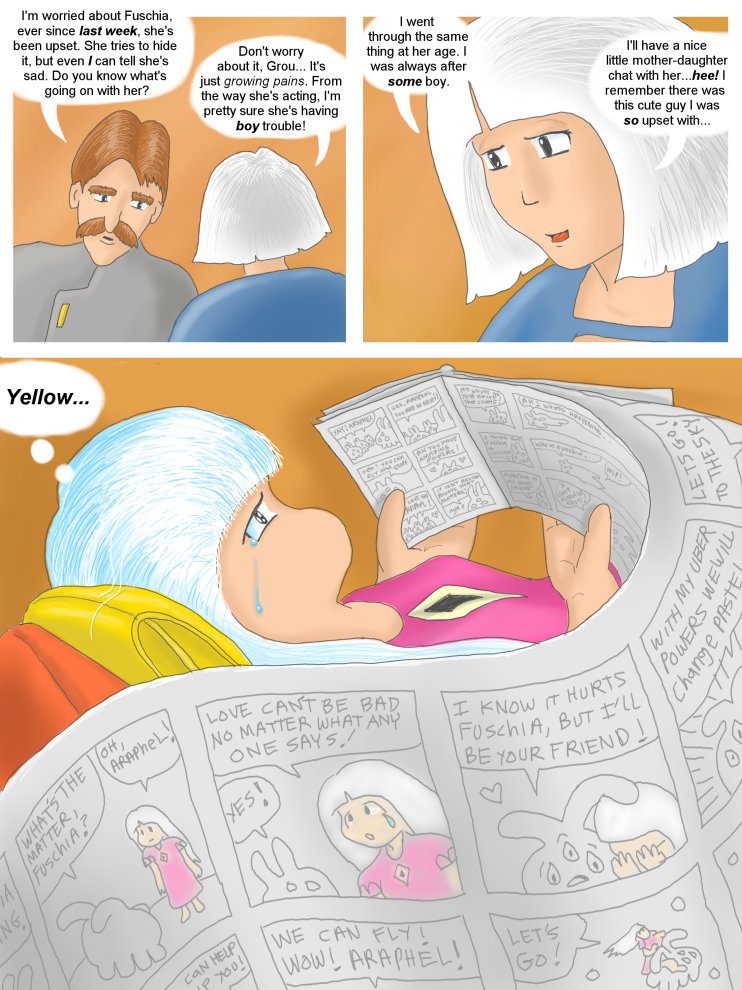 PAGE FOOTNOTES:  Araphel is a fairly obscure funny-animal superhero comic in Pastel. It isn't in really wide circulation, so Fuschia is glad that she got her local comic store in Senryoku to carry it for her. Araphel follows the overly-cute adventures of a soft, blobby superhero in a strange universe of gigantic floating bubbles and boulders. The naughty and mean Skulloids live in the boulder zone and constantly try to conquer the happy and kind bubble zone. Araphel, who possesses magical powers of flight and telekinetic force, confronts the aggressive Skulloids and invariably saves the day.

The Skulloids usually attack with boulders, which threaten to pop the bubbles that everyone in the nice part of Araphel's cosmos live on, and Araphel usually chases the Skulloids away using their own boulders against them.

The big selling point of Araphel the comic (also known as Astounding Araphel, Protector Of The Skies) is that in every issue is a miniature strategy-puzzle game that can be cut out and played with. At least it is a big selling point to the type of weird-but-brainy kid that tends to collect comics like Araphel.

Fuschia is sixteen, with the average young woman married off by age eighteen. Marriage at fifteen is not unheard of. With a mandate to populate and colonize an entire universe, social pressure to qualify for a frontier party and be honored to start a large family on another continent is fairly powerful. The fact that Fuschia collects comic books and plays games at sixteen is considered a bit infantile by her peers and her family, so her mother must be inwardly leaping at the thought that Fuschia might be pining over a boy.

Clearly, Fuschia has thus far been very circumspect about her sexuality.

SPECIAL ARTIST SIDEBAR:  Araphel actually comes from one of the fifteen fully lucid dreams that I am aware I have had in my life. In that lucid dream, I found myself suddenly inside the apartment of a dark-haired, human woman I had never met before. As I looked around my unfamiliar surroundings, amazed that I was fully awake within a dream, the woman spoke to me to catch my attention. She told me she was glad I had fully 'come through' and was 'all there' now. She was glad to see me. She was a bit sad that I could not remember her, and she said that happens sometimes when I visit her. She explained that I had visited her before, in my dreams, and that I often tended to be a little scattered on some visits to her world. Her world seemed to be a kind of alternate earth, only one that commonly accepted the invasion of dreaming visitors from our own world, and possibly others. I have visited other parts of this...place...in possibly two other of my lucid excursions.

After a bit, she asked me whether we should go to the mall. Apparently we had decided to do that the last time I had supposedly visited her. She wanted me to see how well my creation was doing. Still stunned at all of this, I agreed. But then, as is often the case with lucid dreams, I started at this point to lose waking consciousness, and things faded out to black.

When things came back, and I woke up in the dream again, aware I was dreaming once more, and thus in waking and alert control of myself and my thoughts, I found myself standing in a sort of shop in a place not entirely like an earthly mall. There, once she had assured herself that I was 'entirely there' once again (she remarked on my having faded out for awhile), she eagerly showed me something which I had supposedly created a long time back in that world, when -she claimed- I had lived there for a while and been her roommate.

The item she showed me was an oversize rectangular paper-cover book, about a meter high. It was obviously intended for a younger audience, and was in a rack designed for such oversize books. The cover of the book I saw clearly, and it was called 'Arafel' in letters that were almost, but not quite, English. English with a slightly different history behind it. The creature on the cover was as you see it in Pastel Defender Heliotrope, and inside was a chess-like strategy game on one page, which my companion informed me was one of the reasons it was popular. I noted, to myself, that it could not be overly popular, because if I was reading the odd price tag correctly, it had been marked down for cheap sale. Just after this, I lost my focus again and woke up for real, to start my day.

I have never forgotten such an odd experience. I have the vague feeling, as I did at the time, that the woman was somehow correct that I may have had other dreams (who knows if they were lucid, waking dreams) visiting her, but it is only a feeling, and I have no memory of them.