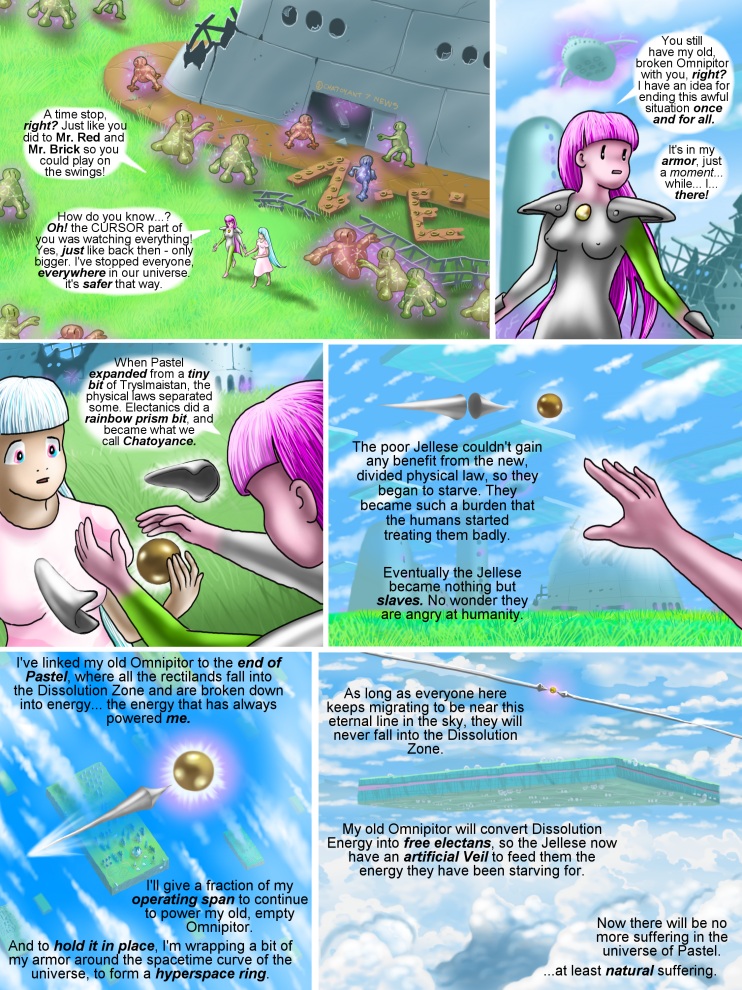 PAGE FOOTNOTES:  For those that have not read Unicorn Jelly, or need a refresher course on the physics involved in this page, I will briefly lay out what is going on.

The Jellese (in Pastel, the Umor) are the native sapient species of the Tryslmaistan cosmos, the universe that all the humans and Jellese in Pastel fell from on the Nakimono Floating Research Island, 800+ years before the beginning of our story.

The Jellese are an amorphous race that have no defined internal organs; they manufacture organs ad hoc, as they need them, and dissolve them when they are not needed. Naturally, changing shape at will, and generating organs as needed results in a tremendous need for energy. This energy is normally supplied to the Jellese in their home universe thanks to the Tryslmaistan equivalent of suns; the Veils. Veils generate electanic force, a form of energy that is essentially anentropic - it reverses information loss, and rebuilds structure. This tremendous extra boost translates to extra biological energy for the Jellese, and so they can enjoy what amounts to an extravagant energy budget.

When a hole was punched out of Tryslmaistan, in an attempt to open a wormhole back to earth, the result was not a nice wormhole, but an Arc-Duct, a type of temporary explosion of spacetime, matter and energy into the Absolute Elsewhere that surrounds all universes. Normally, Arc-Ducts are terrible affairs, like solar flares streaming from a star, only instead, a flare of spacetime streaming from a cosmos. They are very inhospitable places.

Pastel is the rarest of rarities, a stable, cool Arc-Duct. It has taken on distorted versions of the physical laws from the universe from whence it flared, and as Heliotrope describes, the physical nature of electanic energy has been split like light through a cosmic prism, the result being the bizarre force called Chatoyance, which we have seen used as the basis of technology in Pastel. It is concretonized into physical manifestation, as it condenses on black slabs of carefully cut mineral, and then can be used for its energetic properies; as motors, as wires and actuators, as medicine and even as a means of opening wormholes to other universes.

But the one thing this split deformation of electanics cannot do is provide biological energy for the poor Jellese, and this is why they starve, and why they have become monsters. Humans, for their part, grew weary of feeding the ever-hungry Jellese in Pastel, and this had bitter results, which we have witnessed.

Heliotrope has used her old, original Omnipitor (she gained a new one in transferring to her new, fresh, eternal body) as a means to transform Chatoyance back into electanic force. We have seen that the Omnipitor naturally does this earlier in the story, apparently not unlike some kind of exhaust.

Heliotrope has used part of her new body's 'Floaty Buttcover' armor to create a spacetime ring to hold the gemstone that is her old Omnipitor. What this means is that a spear of metallic-looking armor has shot off in a straight line, passing all the way around the finite-yet-unbounded spacetime of Pastel. Think of this as if, in a video game, a sprite went off one side of the screen, only to reappear on the opposite side, coming back. A finite-yet-unbounded universe (Mundis, our own universe is considered such) has no edge, rather it folds back on itself just like that video game screen. A straight line, going far enough, would curve through higher dimensions, only to return from the other side of the sky to meet the place where it began. To put it another way, if you had a telescope powerful enough, you could literally see all the way around the universe to examine your own behind. This is how a single spear can stretch off and then come back to meet the Omnipitor on the other side; a hyperspace ring.

Heliotrope's new Omnipitor, and her old Omniptor as well, are powered by the ongoing death of the Pastellian universe, as the floating continents, the rectilands, fall into a great dissolution zone at the end of the crack in Elsewhere that is the cosmos of Pastel. In that terrible place, matter, time, and space are dissolved into energy, and the hyperspace machinery of the super-advanced HumanoJellese of Future Tryslmaistan convert that into a power source for the Omnipitors. Such is the astonishing level of their pre-Singularity technology. Heliotrope can do such incredible things because she is powered by the end of an entire universe.

Heliotrope could have used her awesome power to destroy the Jellese, to crush them as the monsters they have become, but instead she chose to nurture them, to give them what they need, what they lack.

In this way an enemy can peacefully be disarmed; war comes because of want, or because of need. If the issue is need, real need, such as hunger, or survival, war can be ended simply by nurturance. War for actual need is like a baby acting out; it needs a teat, not a slap, comfort, not punishment. Such a baby knows only its own need, and nothing more. Survival has no moral compass; the only proper, or compassionate response is assistance, not slaughter.

Heliotrope has a golden moral compass, one learned from the people who effectively raised her: Aoi, and Hannya, and especially, above all, Fuschia.

Adults should follow what they would teach their children.