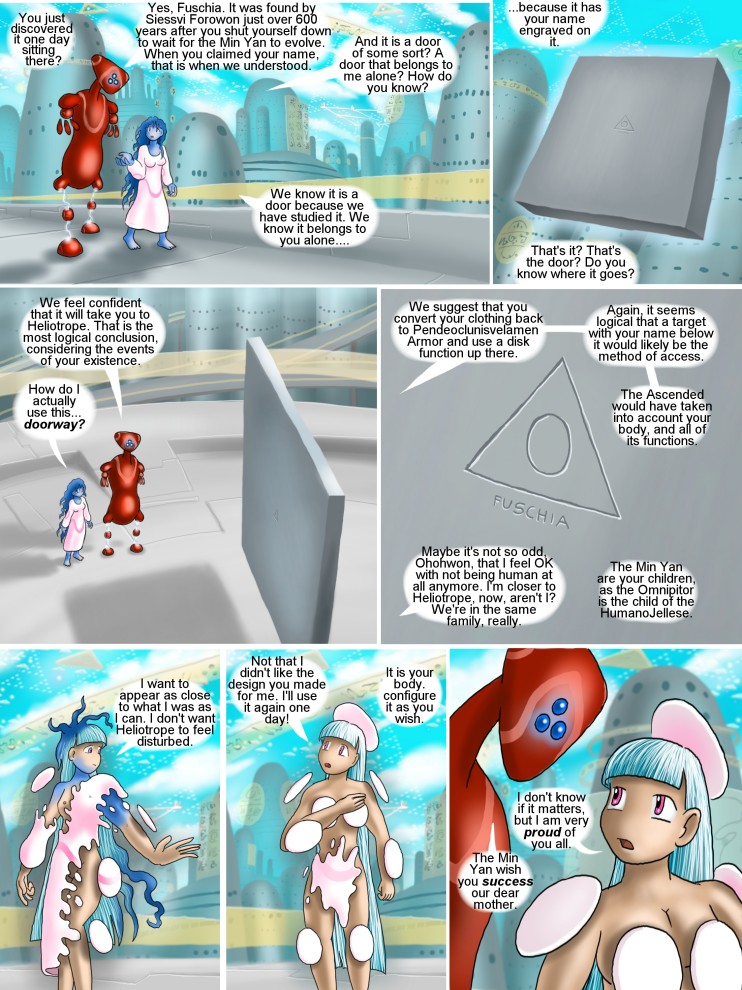 PAGE FOOTNOTES:  During the initial run of Unicorn Jelly, readers in the forums called the peculiar dress of the pre-technological-singularity HumanoJellese as 'Floaty Butt Covers. Which, arguably, they are.

Held in place by a variation of the same repultractive fields discovered by WaiWai Ngo, which allowed the great Ark Carrier fleet to cross the stormwall, Pendeo Armor (short for Pendeoclunisvelamen) is a non-material substance related to the impervious construction of Myrmillian Caskets that is projected and maintained, moment to moment by a rather astonishing work far-far-far-future technology.

It should be understood that Fuschia/CURSOR's new body is not in any way what we would consider human, or even organic. It is alive, just in a very machine sort of way. Fuschia's new body is neither a robot nor a kind of meat; it is a kind of mesomechanical artificial life form, self-repairing, capable of a surprising amount of reconfiguration, capable of being adaptively powered by almost any kind of energy source, and holographically integral; which is to say that if even a small amount of it remains, it can regenerate the whole, intact and complete.

Attentive readers will recall that this absolutely fits the original request of CURSOR for an immortal body.

The Pendeo Armor is a natural process of Fuschia's body, and she can express it at will, and in countless forms. The disk form, the 'floaty buttcover' configuration acts as true armor; she could slide down a violent inter-cosmic natural Arc-Duct (not like the peaceful and artificial version that Pastel represents), or dive through the heart of a Mundis star in such garb. She is all but contained in a private cosmos in Pendeo Armor, and using the disk units, can interact with and manipulate things -and information- on a range of scales that while in no way comparible to Helitrope's Omnipitor, are nonetheless all but godlike.

In short, she is dressed now as a common person of the latter days of the HumanoJellese, shortly before they reached Singularity. From the perspective of the Min Yan, she is dressed in antique ethnic clothing.