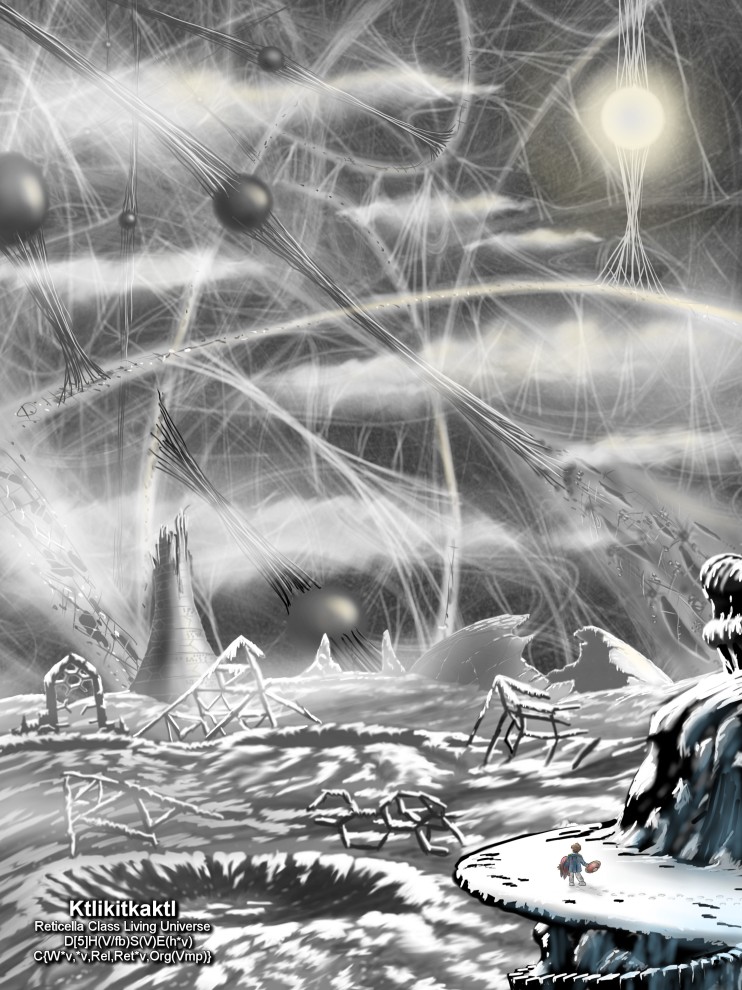 PAGE FOOTNOTES:  Ktlikitkaktl (Tlik - kit - kak -till ) is a variably-sized cosmos that expands and contracts in cosmological scale depending on available energy. It can be thought of as a kind of cosmological capacitor, a balloon...or perhaps more meaningfully, as a stomach, for  Ktlikitkaktl is a Living Cosmos.

What this means is that, for all intents and purposes, the cosmos of  Ktlikitkaktl performs all of the basic functions of a living organism. It seeks out food (in the form of energy, matter, and spacetime), converts that food into bodymass (more of itself) and reproduces (generates more alternate universes that bud off from a parent universe). It is for this reason that most of the Multiversal Catalog statistics for the cosmos are represented as variable entries.

The native, dominant life of  Ktlikitkaktl, who share species name with the universe itself, are so named for good reason - they are a literal organ of the universe-as-living-thing, rather than a sapience that just happened to develop within the cosmos. The Ktlikitkak species are in some ways equivalent to blood cells within the living cosmos, and are dependent upon it, or a link back to it, for survival. They serve to defend the cosmos like white cells, and to carry resources like red cells, in an earthly animal body. But they can do more; they can enter other universes and act as cells of digestion as well...even of conversion. In that sense, the universe of  Ktlikitkaktl and its sapience, the Ktlikitkak, are a bit like The Thing, from Campbell's "Who Goes There' and Carpenter's "The Thing".

The universe of  Ktlikitkaktl appears as an incredibly vast network of strings and cables, akin to the fibers within a human heart, only these strands are vast in size and length, and have whole landscapes upon them. The fibers are the ground and ocean and mountain and land of the cosmos. And the great fibers are hung from each other by still more strands, which in turn are supported by finer strands...

Occasionally some strands, special strands link and support great globular structures, organs, that are the equivalent of stars in the  Ktlikitkaktl universe. These globular cosmological structures radiate light, and heat, and life, space and the very dimension of time itself, as a star radiates light and heat. In what remains of the last alternate universe, what is arguably become the Prime universe, of destroyed  Ktlikitkaktl, there is but one living globe organ left, and it remains alive only because of one last connection to survival....a tiny port into another universe, the universe of Pastel.

Ktlikitkaktl was saved from utter extinction, utter oblivion, by a hole drilled into it. That hole, which let in time, space, energy, and the frozen form of energy called matter, was of course the Introitus created by Meiun Nakimono and Ransei Aoi.

In better days, the  Ktlikitkaktl cosmos sent out streamers to other universes, penetrated them, and opened wormholes to feed from. It sent its emissaries, the Ktlikitkak, to secure these ports, and sometimes to reproduce itself within splays of other universes.

But, after a massive war of cosmic proportions waged against it, destroyed and blasted to a last, fragile splay, the Ktlikitkaktl universe had no more energy to even attempt to seek the stuff of life. It was dying, the genocide of not only a species, but an entire cosmos.

Ktlikitkaktl lives, and the veins that lead to Pastel...are growing in number. The sky clears, and life is just beginning to return, time itself reversing, as anentropic - information regenerating - energies leak from the open life pools.

The question comes naturally: who warred upon this cosmos and why...and was it victim, or was it perpetrator?